The day is almost here when Apple Watch will see the light of the day.

I’m a big fan of apple products – their quality of software and how it integrates with its great hardware. Here’s a good read by John Gruber titled Apple Watch Prelude.

I’m really not knowledgeable enough to comment about its pricing or features (most of which had been unveiled in the WWDC anyway). The only point I’m trying to make (or rant about) in this post is about one thing of this new product by Apple which is concerning – battery life.

That just kills it for me. I own a Pebble and I love it – maybe I fall in love with products I own for a while. When I’d heard about Pebble Kickstarter project, I was mesmerised. It was a breakthrough innovation – a smart watch. I backed it and although it had its own issues (manufacturing delays mainly) I never regretted it – probably cause its CEO, Eric kept updating the backers about the delays, issues, what they were doing about it and what to expect. It was a wonderful journey and I always believed them. Got the Pebble about 1 year after I paid and am happy that I did what I did.

Apple Watch somehow, just doesn’t cut it for me right now. I just don’t feel the need to buy it right now – especially with the battery life that they mention. Probably cause I have a Pebble right now. In fact, it was only about a week back that Pebble went again to Kickstarter to crowdfund the next great version – Pebble Time and I almost started spilling the digits off my credit card. But then I skipped it. Why? because the difference is primary the colour (ok, and that timeline feature) – and I really am pretty ok with my current Pebble v1.0

Getting back to Apple Watch, I really think they have a long way to go – it would not sell like iPhones/iPads sell. I remember saying the same thing when iPad was introduced – I was all like “who needs a tablet – it’s the most useless thing to spend your money on. Apple has lost it” – I was so wrong. Not just the sales, having owned an iPad, I can clearly state that it is truly the best gadget money can buy – even after some 5-6 years post its launch.

I hope I’m wrong again. I would like to see it succeed and hope bhau does some wonderful work out there – I hope I don’t get so put off by the idea of having another gadget which needs to charged up everyday. The only alternative to the Apple Watch right now is Pebble (and its new version maybe, Pebble Time) and I’m pretty happy with it right now. I hope no one’s even thinking about android wear – it’s a joke at best.

but I’ll probably beg more money from people and go for the 4G model, starting at INR 38,900/-

more often than not, the following is the general belief:

- android/google is a for-the-people company, providing affordable stuff to people – choices, as they would want to call it

I’m in no position of saying who is evil – besides, I’d be biased.

There is no such thing as a for-the-people corporation. It is an oxymoronic sentence.

What’s the best contribution a corporation can do to this people-world?

Set new benchmarks in your field, what was not thought possible and doing it – setting new standards. Certainly not by producing mundane, regular, average quality stuff – that is just a company – a business, nothing more.

Apple produces the best quality products – by a far margin, the best. Some may come close (I have not seen though), but nothing matches their finesse – and that is big.

I’m an apple fan but I’d readily become a fan of some other IF there was one. My loyalty is with supreme quality – the option I have available.

Just like mail, the best option out there is gmail – and I love it. Best search is google (but it’s getting muckeir with search, plus your world – whoever came out with that) – and I can’t imagine life without it.

For devices, it is Apple.

Until someone better comes up, my loyalty is with Apple.

ah, and this do no evil, is the most evil cloak I have seen or heard.

The first generation iPod. Yeah the one that would be replaced. This one’s not mine though

They got the name right.

I mean, just look at them for Chrissakes. I wonder if HP tried to license the Apple logo?

Having recently realised and accepted what it should have quite some time back, adobe seems to be too hopeful of HTML 5 now – may be just too much.As said in the post, throwing the baby out with the bathwater.via @econsultancy @eskimon

Q: Which is better, a Mac or a PC?
A: Depends on your needs. And taste. 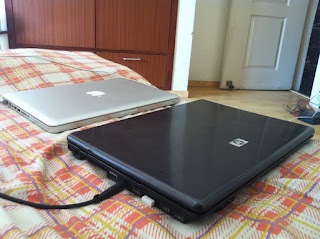 The Mac is not so popular just because of some great, crazy marketing. It is loved because it is a beautiful machine doing the same job as a PC, much more beautifully, besides the crazy, brilliant marketing.
Cost is a big difference when you compare the two categories so it really depends on what you want.

If you just want the job done, without having to give time to learning new things (despite the ‘there’s nothing new to learn’ mantra, there are a few things a Windows user would take time getting used to when starting to work on a Mac), at a lower cost, go for PC, case closed. Given the market share of windows vs. mac, it is more likely that you have worked on a PC (unless it’s your first computer) and thus you would be better off with another, better performing PC if you are short on time & money. You would get standard software (more easy), more standard connectivity options on a PC.
So what is so great about this Mac that people keep raving about?
[Ok, I have been using a Mac (book Pro) for little over a year now and have had to use PC for somethings that I do not want to use the Mac for]

The Mac, as you must have heard from fans, is a quality computer, performing consistently, reliably and does whatever it does, in style.
Reason: it is made & controlled by a single company in the world – both the hardware & software. So the software is designed for the hardware and vice-versa. No confusion, no compromise on performance of either and standard, specific functions for each component – hardware or software.
I’m a fan. I’d be lying if I said otherwise. More so, if you are using a Mac, you can really not be a not-fan!

But I do agree that it is not the best choice for everybody. For eg: I want to end the problems my dad has with the PC – virus, windows threats, crashing etc. and I know Mac wouldn’t have as many problems as the PC, but I do not think a Mac would be good choice for him – there is a learning curve that I do not want my dad to go through – plus the problems (Mac too has some issues, sometimes) would be better solved by the ‘local engineers’ if it is a PC.
I say that cause I remember the faces of my office tech staff when I asked them to help me with printer set-up on the Mac.

PC is inexpensive – it is everywhere (read standard plugs/jacks/software & most importantly help from people around) – so for a computer that does your tasks and does not cost too much, PC is the thing.

ok, enough backdrop, now about the Mac & what I really like about it. Some things great about a Mac are:
- Great quality of hardware: High quality materials used, premium quality components make a Mac. Look at the machine underneath – it is nothing like I have ever seen on a laptop. The battery life – it’s amazing. You know the stuff is great when you see the machine – no compromise.
- Clean, no jazzy stuff: No lights/LEDs for wi-fi, battery, blue-tooth – nothing! it makes a great difference to me, now that I observe it. No stickers of ‘intel inside’ or ‘high capability wi-fi antenna’ etc.
- The software: the animation, is beautiful. The way the desktop is displayed, the way screens change.
- The no-mouse usage: is great. I just can’t work without a mouse on a PC. On the Mac, I rarely have found a need for one. The track-pad is another awesome part of the MBP.
- The service: If under warranty, there is no comparison of the level of service Apple provides. It is again, marvelous.
- Plus many small things which, if I mention here, would feel little crazy. To me.

I still haven’t fully harnessed the Mac – the graphics, the video rendering capabilities of it – and do feel that a lower powerful machine could suffice (heh, never felt that the machine was powerful enough, whenever, whichever PC I have ever had)

What’s bad with a Mac?
- Games: there are hardly any. Or hardly any that I enjoyed playing earlier on a PC
- Price: you have to think before buying. Are you sure, a Mac? Why not PC?
- Emotional: You tend to get emotionally attached to the machine. Not good.

All in all, go as per your suitability but be forewarned, once it is a Mac, it’s very difficult to get back.

But in the end, when I think about leadership, passion and attention to detail, I think back to the call I received from Steve Jobs on a Sunday morning in January. It was a lesson I’ll never forget. CEOs should care about details. Even shades of yellow. On a Sunday.

Vic Gundotra detailing a conversation he had with Steve Jobs in 2008.