So I got this app called Facebook for BlackBerry and was happy that I’d stay connected…Little did I know my calendar is going to be totally screwed. The calendar was full of events I didn’t know or care about and there was nothing that I could do to delete them from my BB.

Instantly I was on crackberry forum, through google search but to no avail — The solutions written there didn’t work for me

Google again — and thanks to this there seemed to be some light…
I tried and, Voila!, as one characteristic professor of mine would say, it was solved.

Basically I had to remove my calendar and re-synchronize again — and in the way, I lost some information that I had stored in the calendar — fault being mine, that I did not pay heed to the ‘care to be taken’ info.

Anyway, I’m a happier man now with the calendar all clean — I did not expect FB to create something like this, I mean there should be an option that lets one avoid this…well, it’s past now.

People are crazy and times are strange…

Beemp3.com is an excellent place for finding a song that may be ringing in your head, of course for the whole discographies and big ones, torrents are the solution — I can’t thank enough for the creators and contributors to this concept of Torrents — it’s a #WIN

Click on the PLAY icon to play the song!

And since I could not embed the Video from Youtube, here’s the link for the awesome Video

That’s all Folks…
(and yeah, I give all teh credits to all the links included here — including Beemp3’s song and the picture of the legend)

Firstly - Cigarette smoking is seriously injurious to health – yours and the ones around you. 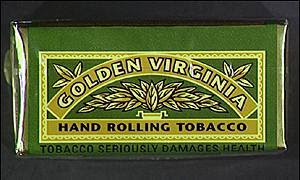 Having said that, let us look into some questions on this new found love of mine:

>> Are hand-rolled cigarettes (HRC) less harmful?
– NO, in case you do not get it, just google it man — I did that — no evidence of them being any less or more harmful (although the research does say, which is needless, that hand-rolled ones contain lesser chemicals)

>> Are HRC better in taste?
– Taste, my friends, is a personal choice. Although I do find the taste better most of the times, I do feel like smoking a factory made one occasionally. Some people I’ve met swear by its taste (I use Golden Virginia tobacco)

>> Will trying to do this reduce or attenuate my smoking habits?
– If that’s the reason — and the primary reason — for you to take up rolling your own cigarettes, it would not really help unless you keep some principles embedded with it. I tried with the same intentions and have partially succeeded, since my principle was to not to buy and smoke and was partially administered. But I did smoke lesser since I have started this (been about 2 weeks)
Although I must say, it does reduce your smoking to some extent — for the obvious reason that one needs to put in some efforts before he/she can light that stick.

>> Is HRC cost-effective?
– A definite yes (of course with a disclaimer, unless you smoke more than what you’d’ve smoked on factory ones)
The reason is simple, you buy tobacco (about INR 200), cigarette paper (about INR 25 for small size – my preference) and it makes about 60-80 cigarettes. A lot of cost-effectiveness there (let’s keep the future medical bills and their financial effects aside)

>> Does it make you feel better?
— Better? – No.
Different? – yes. You see it takes time to roll a cigarette and with time you get better at it (not something that one may be proud of, but then better to be better at it if you are at it). Patience is another virtue the art of rolling cultivates — and I have a desperate void for the virtue.

If you are a smoker who has been smoking cigarettes, do try rolling your own cigarettes and let me know if you need some help or your experience about it.
…Keep rolling 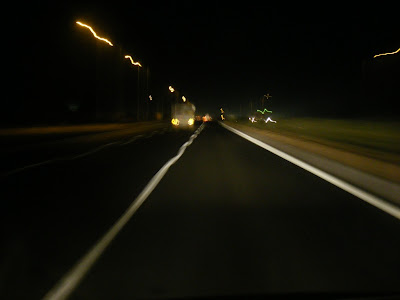 The plan was quite whimsical, but had a long awaited desire to visit the place at this time – while the proverbial Kumbh ka mela was on.

To add to the occasionalability of the event, it was going to be a full-moon night when we reach, if we started off right then.

We started off well from A302 – Buddy, Kavita and me — then there were the chronicles of Badsra on the way.

Anyway, next scene, I’m on the couch and wondering how come I’m here, where am I?
after the regular-moments lasting balck-out, I realised I was at the Badsras’ and certainly not anywhere near Haridwar.

But the plan was on!

So we started off at about 1200 Hrs on 28th — although I was planning to head back to Gurgaon and get going with the regular, media exchange between hard disk, computer, TV, my head.
Good that I stuck on the Haridwar trip.

After 3-4 hours of driving (I was comfortably on the back seat though) we realised that we had traveled only about 60 kms – some wrong route that we had taken.

Anyway with a stop for samosas, fuel-refill we were there at the place by about 2030 hrs and the feeling was good.
The place was nowhere like I’d thought it’d be — crowded, full of people and noise — Probably it was the timing. The last pooja is at 1815Hrs so the crowd has dwindled — although we did hear about babas and their shivirs which remain lively even after the last pooja, we thought we’d go there after our dips. The Dips, I must say were quite nice — the water was cold and more than that the current was quite high. Much as I tried experimenting and applying different schemes to withstand the current, I could never stay there for more than 15s.

It was a full-moon night [Poornima, Poornmasi]After the holy dips – and the assumption that our sins have been washed away – we went out for pet-pooja. 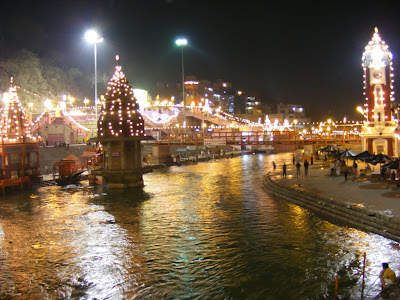 Despite having the tripod, could not manage to click the picture I had in my mind — need to learn this stuff too!